Have you ever thrown anything from a great height?  Perhaps from an office window or hotel balcony?  Ever launched leftovers, slung scraps, tossed tissues or projected pot plants?  Worse things have been hurled from Chinese apartment blocks, much to the alarm of those in the gardens below.

The Internet is full of such accounts. Air-conditioners, glass vases, meat cleavers, and other unusual items have been biffed from above (falling at dangerous speeds) to paths,  pavements, streets, shrubs, and people beneath. Writing personally, I’ve collected a bit of soapy water and a rubbish bag or two – usually from a lower level abode and it ain’t fun!  I’ll admit to hurling a bucket of water from my eighth floor apartment over 16 years ago. This was to address the problem of four 3am revellers singing an extended rendition of the Mickey Mouse Club theme. I aimed my H2O at a safe distance from them and SPLASH!  No-one was injured, and the concert ended abruptly. I was awarded a public service medal for my efforts.

Last month China Daily reported that a three month old girl was in coma due to being hit in the head by a falling apple. She was in a Shenzhen hospital undergoing brain surgery. Little Fanfan had been out for a walk in the garden with her grandmother when the incident occurred. Apparently the villain was an 11 year old girl that lived 24 floors above. It was a terrible accident caused by the innocuousness of throwing a half-chewed apple out to her dog on the balcony. The apple slipped through the cracks and the rest, they say, is history.

You’d think that the adults in our compound (including my own Block Six) would have enough common sense regarding good balcony behaviour. One look at the gardens below our building tells a very different story. The amount of ‘stuff’ that ends up among the plants is quite surprising including: socks, pyjamas, small bottles, plastic, nappies / diapers, wastepaper, toilet paper, shoes, and food wrappings. Who is responsible for the cheeky chucking?  Perhaps it’s the kids who find it funny to discharge Duplo blocks from  the dreamlands, or catapult clothes pegs and hangers from kingdom come. It’s no wonder that someone from some department posted the following announcement in our lifts: 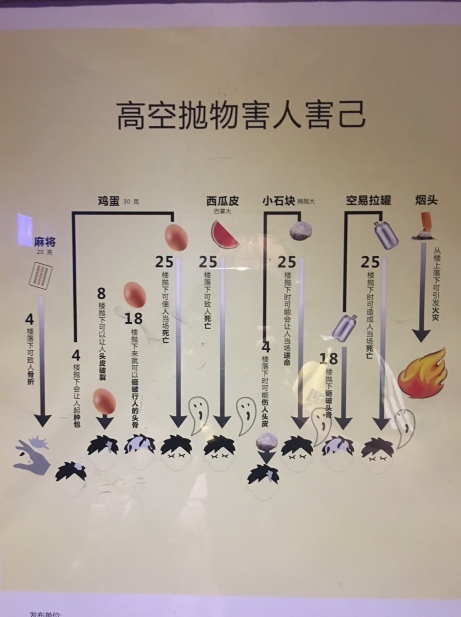 It’s fairly obvious that sticks and stones (and empty metallic water bottles) will break bones and cause death if dropped from a reasonable height. But what about eggs and fruit?  Mahjong tiles?  Goodness me, I’d never thought that such inoffensive items could become murderous. It reminds those of us that need to walk daily underneath tall buildings (that may include you dear reader) that life is so very fragile. Indeed one could imagine the ridiculousness of the news headlines:

Expat felled by watermelon peel. Friends say he was one in a melon.

Thanks for reading my little blog posts. I’m eggs-pecting a few food puns over the coming days.