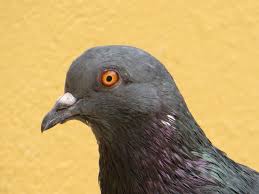 It’s not very nice to call someone Mrs. Pigeonface. I can hear my late mother’s voice with a mild “It’s not becoming of you” rebuke. It’s probably not very PC to liken someone’s appearance to a pigeon either. Mrs. Pigeonface doesn’t even look like a pigeon, much.

The thing is, there are probably much harsher descriptions for this 11th floor woman (and her six year old son). Apartment living means that you’re living in close proximity to a whole bunch of different people. You don’t get to choose who these people are. Some are friendly, cultured, and even outgoing. Others are more reserved, preferring to keep to themselves. You don’t really mind what they are like so long as they can behave themselves in an enclosed space for what really is a small amount of time.

We have quite a bit of history, Mrs. Pigeonface, son, and I. Her kid (let’s call him Horace) goes to the same school as Miss K. We’ve seen Madame Pigeonface and Horace galloping erratically, if pigeons can gallop, down the road on the way to school. They’ll stop to admire a kitten, a flower, a large advertisement, have a laugh, play peek-a-boo, or tie up shoelaces before charging forth all over again. This sequence is repeated several times – often on the same journey! She’s invested in a bicycle with a small Horace carrier which has rendered her even more of a threat than before. Balance doesn’t seem to be her thing. Just ask the vendors lining the narrow lane near the school.

Mrs. Pigeonface and Son (sounds a bit like an fishmonger) have mastered the Delay n’ Dash – the subtle art of delaying entry to an elevator just long enough till the doors begin to close, then bashing your way inside with all the grace of a rugby prop. They’ve also pioneered the Surge and Stop – the exit-first-at-all-costs method of lift departure followed by an abrupt stop a metre from elevator to check mobile phone. This guarantees a small jam behind you.

We encountered them yesterday in Lift B. Horace’s perfectly executed Delay and Dash nearly wiped out my daughter. He decided to press the close door button, even though my finger already occupied this space. I told him so too. Horace ignored me and pushed my finger off  (the temerity of it!) as the lift carried on its merry descent. Mrs. Pigeonface absent-mindedly rummaged through her bag and Horace edged closer to his reflection in the doors. His mouth began to take on a different, deliberately grotesque shape. Slowly, one large wobbling, perfectly-formed saliva bubble appeared from his mouth. It clung to his lips, taunting us until it popped, as if on cue, as we arrived at level one.

They lurched forward, crashing into others exiting from Lift A. There was no Surge and Stop this time but a slow hand-in-hand stroll that irritated the living daylights out of the 20-odd time-pressed people behind them. Mrs. Pigeonface and Horace looked happy and that was the main thing. A tender and loving moment between  mother and son.

Thank you for taking the time to read my blog. Feel free to leave a comment. Hopefully you won’t need to go through the rigmarole of registering beforehand. Have a good weekend.