Thanks for the encouragement, comments and support. A couple of questions came in these past few days:

“KJ, what do Chinese do when it rains?” – Brian, South Africa

Great question Brian. They get wet!  (will answer this question in another blog)

Another really interesting question. Thanks Mike. This leads to today’s topic: 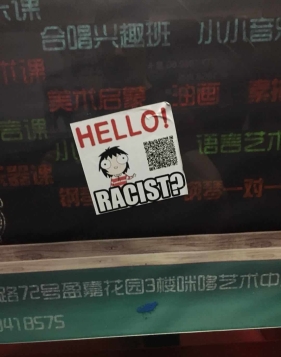 The picture above was taken by a friend in an lift across town. The elevator accesses a gym frequented by many Guangzhou-based foreigners. Curious, my friend scanned the QR code attached to the sticker and found a link to a dubious website. No one seems to know who put the sticker there but judging by the site’s content, it was mostly likely an expat.

I’m not going to provide a link to the site. Why?  Because it’s a site that purportedly supports expat rights but seems as much a vehicle for hate-speech as anything else. Let’s not mention the frequent spelling mistakes in the site’s blog posts (shock horror!). It should be easy enough to find if you’re really interested.

Flimsy journalism backed with dodgy statistics – yuck. A sample size of ten does not “maketh” an accurate result!  The message boards are worse. Swear words, some I’ve never heard before, describing people of both Asian and European descent. I guess this partly helps answer Tom’s question. People are free to rant and rave under the cloak of anonymity and often true feelings come to the surface. People complain about being “helloed” everywhere they go here. Some Chinese get annoyed about being “Ni haoed” too, especially those with advanced levels of English. Africans appear by far to get the worst treatment.

I’ve noticed a degree of unintentional racism here. China is still so homogenous, so completely Chinese, that your brown / blond / red hair and white / dark skin will make you stand out. The locals are simply not yet used to foreigners. My daughters get a lot of attention from people, most of it admiring and very kind. Their eyes, skin, hairstyles (and inevitable shyness from the attention) get remarked upon. “Can they speak Chinese?”  “How about English?”  “Can they speak at all?”

People point at my nose. One little boy took his fingers and tried to stretch his mini-snout, hoping to equal mine in size. No show on that score buddy. I’ve been called a few rotten names over the years (it’s funny how one remembers the insults) but I think people are generally pretty nice to me. The loud “helloooooos!” and mocking of my Chinese used to grate. Then I discovered meditation. Thanks Headspace. I might have said one or two naughty things to one or two Chinese people here too… some time ago. None of us are robots.

So Tom, is there racism here in China?  Yes – lots of it. But I think we’re all guilty of it at some level or another.

Lifts become funny places after dark. They take on a different “feel” once most people are home, snuggled in their apartments for the evening. There are those that head downstairs for an evening walk but by 10pm, things get pretty quiet. The cleaner has gone home too.

This might explain the prevalence of rubbish, cigarette ash, and mud inside the elevators during the late hours. We arrived home late the other night and we preoccupied with getting the kids to bed. Eagled-eyed Miss K spotted a liquid substance in the corner of Lift C.

“Someone has spilt their orange juice in the corner of the lift!” She said excitedly.

We looked closer. It didn’t seem like the 100% pure orange juice brands that are so popular in the market place. It didn’t smell like orange juice either, more like strong, salty vegetable soup. Too much information?  I’ll go on.

“Yes” I replied “but a dog doesn’t normally get its business halfway up the elevator wall.“

The topic arbitrarily turned to something else as it often does with eight year olds – My Little Pony, or an incident in class that day. But my interest was piqued. I’d once overheard primary school boys bragging about piddling in a lift but thought it that – braggadocio. Lifts stop pretty quickly and it would make an embarrassing situation if a male was caught by others midstream. How could one possibly explain the situation?

As I mentioned above, it was after 10pm and someone might have felt a little emboldened. Perhaps they’d had a bit of liquid courage and were caught short. Maybe it was a dare?  Maybe it wasn’t anything other than spilt soup splashed 1.5 metres up a wall… but I was reminded of this incident (below) that occurred in Chongqing earlier in the year. 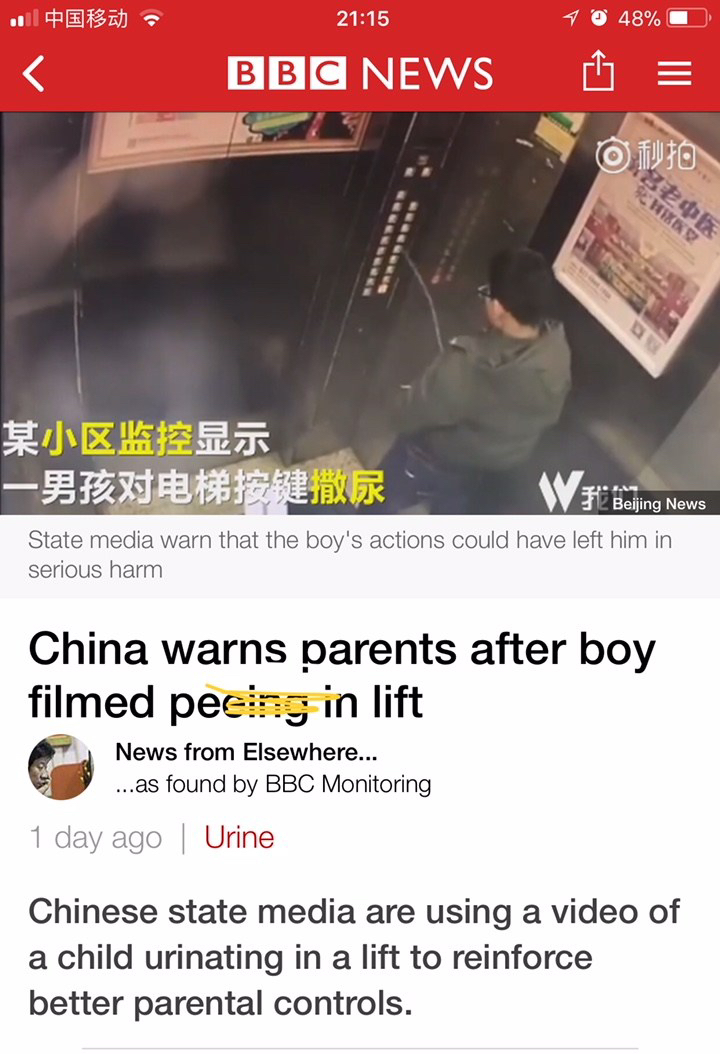 Apparently he managed to short circuit the electrics and stop the lift. He was left to stew in his own juices (in pitch black darkness too) for quite some time before technicians rescued him!

Thanks for your comments and feedback. It is nice to see viewers from different parts of the globe. Your viewership is much appreciated.