I hate taking the lift here. There said it – no fairy dusting the truth. Sure, the elevator is a great place to meet neighbours and network. You might see a cute kid or two, maybe a puppy or a kindly educated grandmother. More often than not it’s a grumpy old bugger / buggeress that shuffles in and gives you the stink eye.

If looks could kill.

Lifeinlifts.com hasn’t discussed elevators for quite some time. Let’s break the drought and explore areas of “lift ridiculousness” in May 2019. 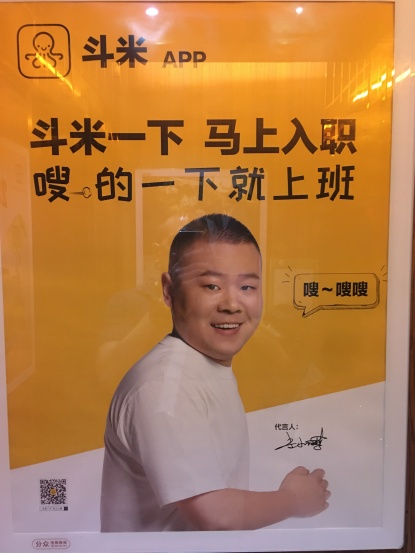 Advertising is a funny thing here in China. Things sell best when a celebrity is involved. That’s the same anywhere, isn’t it? Here, the celebrity needs to flash the thumbs up or show the Richard Nixon victory sign. Products and services need to be marketed in a  luxuriant way, showing a life of opulence that awaits when you choose the right brand. The West is just as guilty of this sort of manipulation but you wonder if we’re not stuck in a kind of time warp in China.

Marketing experts used to view their target Chinese audiences as being rather unsophisticated. You wonder sometimes whether their thinking has changed…

This advertisement for Ganten water (shot by famous actress Jing Tian and American model Donny Lewis) is ubiquitous in lifts throughout the city. My nine year old daughter cannot get her head around the message and wonders why two oversized water bottles are in the backseat. There are some things a father just can’t answer.

These are the people whose time is more important than yours. They rush the lift before you exit. The humid weather of May has seen a 50% increase in incidents of elevator bumrushing (China Elevator Bumrush Quarterly Review, 2019).

It’s really a no-no. Fourteen other people don’t need to hear you and your husband discussing your grocery shopping list at 120 decibels. Nor do they need to know about the paint you plan to use in the kitchen.

Curry beef balls are best enjoyed outdoors, not in transit!  Also, take note Mr. Wang – it is not okay to rip loudly / cut the cheese in an elevator, especially when you’re only three floors from your destination.  Do you think that we can’t hear / smell it?

This video clip was filmed on Tuesday, May 21. To the right – me. On the left, a middle-aged woman with a loud smartphone stuffed into her pocket. This really was a compulsory concert. Confined space with nowhere to go!  Talk about a captive audience. The video doesn’t capture just how loud the music really was.

You know life is going pretty well when all you’ve really got to complain about is the elevators!

Upcoming blog posts include: Trials and Tribulations of Finding a Kindergarten in China, Unlikely Bedfellows – Sex Markets and Primary Schools, and The Daily Walk of Death.

Thanks for reading. Your support is much appreciated.