They arrived a few short years ago. Now they’re an epidemic.

I’m referring to the legion of couriers in skin-tight fluorescent-yellow tops emblazoned with a Kangaroo logo. They zoom around the city on mopeds and scooters delivering meals to office workers and those people who don’t want to battle peak-hour crowds. It’s a great success by all accounts.

The service is called Meituan Waimai (Meituan Takeaways – a translation of sorts). 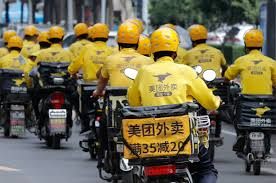 Bloomberg estimated that the parent company Meituan Dianping was worth $30 billion (US) in October last year. The numbers are astounding. 256 million people used the service in 2016 with forecasts of over 400 million users this year according to Bloomberg. Over 1300 Chinese cities are in on the act with citizens near and far taking advantage of lightning-fast service from a man (almost always a man) on a bike delivering a hot meal. They also deliver groceries, massages, haircuts, and offer car washes while you’re working. Afterwards they’ll even park your car and take a photo (sent to your phone) as proof of a job well done.

It all sounds so impressive. And I guess it is. Whoever formed the company (someone called Wang Xing I’ve just discovered) will be richer than their wildest dreams. They’ve done very well in an ultra-competitive market.

Some of us have to live with the Chinese kangaroo. You see, there are two sides to this fluorescent-yellow coin. You can get food delivered quickly when you don’t feel like walking the 200 metres to the actual restaurant. You don’t need to elbow your way to the counter or defend your space from queue jumpers. The meal is still warm and (usually) intact.

However the courier drivers might benefit from a bit of extra training. Road rules might be one place to start.

The Guangzhou Grade Two English Textbook offers a catchy chant in its section on transportation. Couriers (and drivers here in general) would be sage to take note:

Red at the top, you must stop,

Yellow in-between, get ready for green,

Green below, you can go!

The kangaroo drivers ignore red lights and often drive right in front of my moving car. There’s a swerve and they miss me. Everything is okay – till it’s not. Drivers also speed along footpaths and inside gated-compound paths putting everyone from toddlers to centenarians at risk. Not a day would pass without witnessing an act of  risk-taking kangaroo idiocy.

I walked past one driver yesterday who looked at me as though I was an alien from a distant planet. His eyes were big and round as he studied me intently. Not a smile to be seen. He had parked his bike near Block Six and was presumably returning from a delivery. Minutes later another kanga-courier Jack-in-the-boxed an old lady as he got out of a lift.

A good friend, Mr. Halifax, put it in perspective – who would want a job racing around the streets of a Chinese city in 40 degree heat? Buffoon drivers added to the mix and it would make for a devil of a job, an unpleasant one for sure. Maybe he was right. Perhaps I should cut these marsupial daredevils some slack.

With this newly-acquired perspective, I stood next to a Meituan courier in Lift A this morning. He stood erect, helmet glowing flourescently. “You have a tough life” I thought. “You’re merely trying to earn an honest living. I can’t begrudge you for that.”

Whereupon suddenly he turned in my direction and sneezed all over my left arm.

Back to square one. 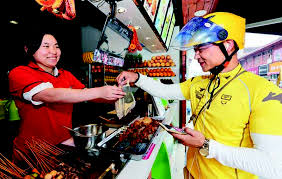