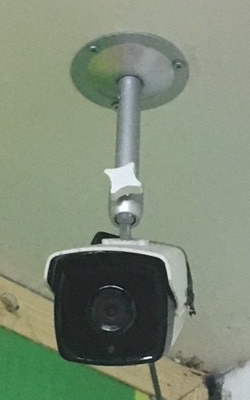 It was late at night. Danger was in the air…

No, not really. Just an average evening in Block Six’s lobby. No-one was around – just me. I’d endured an hour on Guangzhou’s busiest roads with highly-skilled and considerate (ho ho ho) drivers. Class had ended late and parents had wanted to talk. By the time I’d eventually reached the apartment lobby, home seemed within reach. The lift arrived.

Most of us have had the pleasure of hearing static at some point or another. It’s a popular form of torture. I heard static in Lift B. It was coming from the emergency contact speaker located above the elevator buttons. If ever in trouble, people can press the emergency contact button and converse with somebody at the other end. I swiped my card and the elevator doors closed.

There it was again.

I could hear people, young women to be precise, speaking. I guess they were the operators who “man” the phones for the elevator company. Maybe they work for the building management department. They come from a distant, unknown land.

Operators: Ramble, ramble, look at that big nose of his, so sharp, ramble ramble

Hold on, I have a big sharp nose…

I’m relatively tall, from New Zeal….  the blighters are talking about me!  They don’t realise that they’ve left the microphone on – they’re live, on-air!

I turn around and face the elevator camera, located in the top left corner.

Operators: Ramble, ramble, can he hear us?  Yes, I think he can, no, surely not…

Pointing my teacherly index finger in the camera’s direction, I produce my sternest frown.

Operators: Oh my goodness he CAN hear us, heaven’s…

The doors open at my floor and I begin to exit. There’s a panicked clunk, the sound that’s made when someone switches off a mic attached to a PA system.

And THAT was the last time anything was ever heard from these voluminously nosy young women – girls really, who enjoyed chatting so very publicly about their beloved lift passengers!

One thought on “Yikes! Creepy Cameras and Nosy Parkers.”